The Mass of Christian Burial for Ruth and Alphonse Steines, a longtime Stewartville,MN area couple, will take place at 11:00 A.M. on Thursday (May 19, 2022) at St.Bernards Catholic Church with Rev. Kevin Connolly officiating. Burial will follow at the church cemetery. Mrs. Steines died on Thursday (May 12, 2022) and Mr. Steines died on Friday (May 13, 2022) both from natural causes, at the Stewartville Care Center where they had resided together since February of this year.

Ruth Elizabeth Steines was born May 31, 1931 on the family farm in Rock Dell Twsp. to Edwin and Laura (Hugstad) Scharberg. Alphonse John Steines was born on May 22, 1932 in Adams, MN to John and Francis (Harter) Steines. Ruth grew up on the family farm, attended country school and Stewartville schools, graduating from Stewartville H.S. in 1949. Alphonse attended Adams schools, graduating from Adams H.S. in 1950. He was employed as an auto mechanic in Adams before enlisting into the U.S. Army, serving overseas in Germany during the Korean Conflict. Following his discharge Al continued working as an auto mechanic in Rochester and Stewartville. Ruth was employed in Rochester as a bookkeeper for several years. Ruth and Al were married on June 18, 1958 at St. Johns Catholic Church in Rochester. Following their marriage the couple lived in Adams and then Rochester, before building a house in Stewartville, where they raised their family. In 1973 they moved to the Scharberg Family farm, where they lived and farmed for a number of years. Al was also employed at Crenlo Inc. in Rochester for 25 years until his retirement. Ruth was a homemaker and was employed as a bookkeeper with the Stewartville School District for 15 years until her retirement. Following their retirement they moved back into Stewartville where they made their home for several years. They were longtime active members of St. Bernards Catholic Church where Ruth did bookkeeping and Al ushered and was involved with Men’s Club activities. Al was also a member of the Knights of Columbus, the Stewartville American Legion and the VFW. Together they enjoyed many trips including overseas to Europe, trips to Hawaii and Alaska and cruises. They liked visiting with friends, neighbors and loved spending time with their family, especially their grandchildren and great-grandchildren.

Al and Ruth are survived by their son – Dean (Martha) of rural Hayfield, MN and their daughter – Linda (Christos) Petsoulis of Duluth, MN; 6 grandchildren – Megan (Nate) Stoltz and 2 great-grandchildren – Abigail and Benjamin, Eric “Dan” Christianson, Rachel Steines and 2 great-grandchildren – William and Jack; Katina (Logan) Kerkhof and 1 great-grandson – Kostas, Dr. Napolean Petsoulis and Christina Petsoulis; Al’s brother – Robert (Patricia) Steines of Rochester, MN and 2 sisters – Madeline (Harlan) Harrison of New Brighton, MN; Mary Nelson of Minnetonka, MN and nieces and nephews. They were preceded in death by their son – John and both their parents.

A time of visitation for family and friends will take place from 5 to 7:00 P.M. on Wednesday (May 18, 2022) at St. Bernards Catholic Church and 1 hr. prior to the service on Thursday morning. Arrangements are with Griffin-Gray F.H. in Stewartville. Online condolences and memories of Ruth and Al are welcome at www.griffin-gray.com 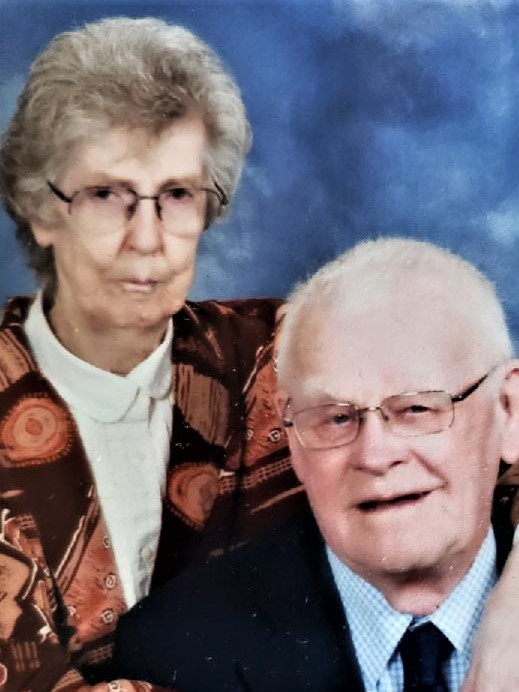