Richard Heppelmann of Bellechester was called to his heavenly home on December 18, 2022. Born to Frank and Mary (Krick) Heppelmann on September 2, 1936, he was raised on the family farm outside of Bellechester, attending Lake City Schools. When he was 15, his father had a farm accident and acquired tetanus, so Rich quit school to tend to the family farm during the recovery. As a young adult, his brother, Arnie recommended he consider attending a trade school to become a bricklayer, and Richard found his life’s work. He was a proud 50-year member of the Bricklayers and Allied Craftsmen Union. He worked for Weis Builders for many years, then struck out on his own with his friend and neighbor, Bud Strauss. When they had enough ‘fun’ running their own business, he was welcomed back to Weis Builders. He was the masonry superintendent on schools, hospitals, office buildings, and churches, and would proudly point them out as we passed. He encouraged others to work in the bricklaying trade, setting them on a career path.

One Thanksgiving Day in 1959, he was at Mass when he saw a young teacher from Goodhue High who was attending before heading home to her family. He immediately began courting his future wife, Ann, with whom he had 6 children and 56 happy years. His passions included fishing, camping, and playing cards (500 anyone?), and he often combined weekends with family and friends doing all these things. He could often be found working in his garden, in which he took great pride. He was a man who stood for his convictions and served as mayor of Bellechester and always looked after his fellow man. After he retired, he discovered new sources of entertainment to fill his free time. He started making wine from berries, experimenting with different fruit and recipes, saying it was for family, friends, fundraisers, and freeloaders. Some of his wine was quite potent! He also joined the Lion’s Club in Goodhue, where he threw himself into the fraternity and was selected as Man of the Year and the Melvin Jones Fellow Humanitarian award. Always a giving man, Rich volunteered as a driver for Three Rivers and Meals on Wheels. He was fascinated by history and visited many places throughout the US and Europe to soak in the heritage.

He is welcomed into heaven by his beloved wife, Ann, his parents, and siblings George, Bob, Arnie, Mary Ann, and Mary Magdalene. Left to cherish his memory are his children, Andy (Kati) of Steamboat Springs, CO, Linda (Glenn) Test of Mena, AR, Mike (Carrie) of Kasson, MN, Mitch of Eden Prairie, MN, Larry (Lisa) of North Tustin, CA, and Jerome (Patty) of Malvern, PA; 12 grandchildren and 2 great-grandchildren, his brothers, Leo, Ed, and Ken, and numerous nieces and nephews.

Richard was a life-long member of St. Mary’s Catholic Church in Bellechester and member of the Knights of Columbus.

A Catholic Funeral Mass will be held on Wednesday, December 28 at 10:30 a.m. at St. Mary’s Catholic Church in Bellechester, with Father Thomas McCabe officiating. Visitation will be held from 4:30 - 7:30 p.m. on Tuesday, December 27, at Schleicher Funeral Homes, Lake City Chapel beginning with a Rosary at 4:30 p.m., and one hour prior to the service at the church on Wednesday. In lieu of flowers, please consider a donation to the Red Cloud Indian School (www.redcloudschool.org) or to the St. Mary’s Cemetery Fund in Bellechester. 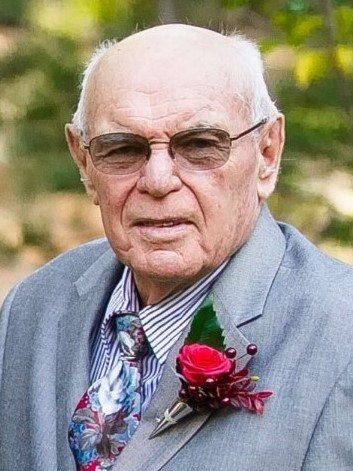